This article I wrote was originally printed in The Courier (May Issue), the official diocesan paper of the Roman Catholic Diocese of Winona, MN.  Reprinted here in honor of Mother's Day! (Obviously, from a specifically Catholic Christian perspective. ;-)

On his very first day as pontiff, Pope Francis desired to visit St. Mary Major, a Basilica dedicated to Our Lady. He gently laid a bouquet of flowers before an icon of Our Blessed Mother, prayed and lead everyone in a hymn. As he was leaving the Basilica, he greeted those who worked there. One man asked if he would bless their son, not yet born. His wife, five months pregnant, stood beside him. Pope Francis stopped the hand shaking to offer a special blessing for the unborn child.


Many times during these first few months of his pontificate, we have seen the Holy Father go out of his way to bless mothers. Just last month, Pope Francis blessed the unborn baby of former Miss USA, Ali Landry (featured below). His actions reaffirm the gift God has blessed women with, the gift of the capacity to bear life, to bring forth new human persons into the world. 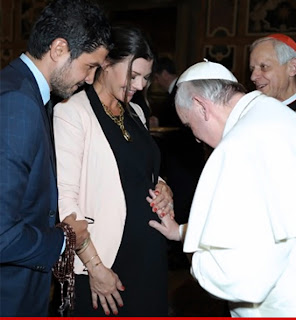 That unique gift that God gave to woman has been recently undermined in our culture. It is a hidden, slow erosion, like waves lapping up on the shore, slowly taking more and more of the value of motherhood away. We can see women separated from their gift of child bearing through abortion, contraception, and the pressure to make “more of themselves” through a career over family. Yet, it is not just physical motherhood. Women are also undermined by the push to set aside their natural, motherly instincts (to nurture, cooperate, guard, and protect) and take on more manly traits in order to find success. Yet, these pieces are the effect of the erosion not the ultimate cause of it.
The ideology that men and women are basically the same began this erosion. This idea surfaced from a need to find equality between the sexes. “Equality” is a very trendy word right now and yet not well defined. In mathematical terms, equality means the “same.” Each number on either side of the equal sign must have the same value. Some people like to translate this to mean that equality of the sexes means “sameness.” In order to be equal, then, we must make both genders the same. In this line of thought, therefore, when they are “forced” to be different, this must make them unequal and that cannot be tolerated. Women needed to be “freed” of the inequality that their gender created – and therefore be “freed” from their motherhood. If women were able to escape from the “burden” of children, they could be just as successful and “equal” as men. Hormonal contraceptives (ie. “the pill”), promised women the ability to rid them of the burden of their gender.
This is not the Christian view of equality. We believe that God created all men and women equally, but uniquely. Every single individual is endowed with special gifts unique to him or her. Does this make him or her better or worse than the next person? Not at all! It makes them uniquely themselves and able to offer that gift of their unique self to society. In the same way, God created men and women differently. He created them equally; they both have the same value, the same dignity as a person. In His great goodness, He also created them complementary. Each one has unique gifts to offer to society that make them not less nor greater but that much more special!
The equality of men and women should be sought through the elevation of each of their unique gifts not through the destruction of one for the other. The more we elevate motherhood, the more we praise every woman for whether she is a physical mother or not, the inherent stamp of that mothering nature upon her being affects all of who she is.
Bl. John Paul II saw motherhood and fatherhood as the way in which women and men live out their woman-ness and man-ness in the world in a physical or spiritual way. For women, he would say, her womanhood is who she is but her motherhood is how she lives out her womanhood in the world.
When we undermine women’s gender, using chemicals and medical interventions to separate her physically from her capacity to bear children, we detach her from who she is as woman! This is another reason that the Church recommends working with a woman’s body to plan a family and space children using natural methods (check out the NFP section of the Office of Life page on the diocesan website for more information. The natural methods are highly scientific, 99% successful and fully organic).
The Church is not at all against women having careers and considers a strong feminine presence in society to be important. Yet, there is a distinction here; a strong feminine presence in society does not mean women who are desperately trying to fit into the male model of success. We need women who bring their beautiful feminine and motherly nature to society in everything that they do.
We look to Mary especially in this month for mothers to give us the ideal model for women. It is her “yes” to God and her willingness to cooperate with Him, nurture Him and give Him back up to the world in complete selflessness that shows the power of her womanhood lived out in motherhood.
In a world that often undermines the value of motherhood, seeing our Holy Father, Pope Francis make a point to honor our Blessed Mother and women, speaks loudly of the call we all have to affirm the beauty of motherhood.
your friendly new feminist,

Get the book! Woman How Great Thou Art!  Order on amazon today!  (If it does say out of stock, order anyway, they are getting more in soon! They operate on a supply - demand; so the more people who order, the more they will keep in stock! THANK YOU! many blessings to you!)