(I had begun this post on the feast of the Queenship of Mary, but perhaps it is just as beautiful to be given as a birthday present to our Mother.  Happy Birthday, heavenly Mama!)

Are you getting the feeling this is going to be a rather Catholic post?  You are so smart!  I know there are many of you reading this who are not Catholic; however, you might actually get more out of it than the Catholic followers!

The thing is, there are some pretty deep misunderstandings about the Catholic Church’s opinion on women as of late and from a Catholic perspective, I thought I’d give a whack at setting a couple things straight. (No, I’m not the pope, so my authority in these matters is probably questionable.  I did study Catholic theology for eight years and have written a book on the matter – set to be released in eBook form next month, check it out! – “Woman, How Great Thou Art.”  I know, I know, shameless plug. ;-)  But seriously, my knowledge is founded in Scripture, papal writings and Church documents.  If you have a question about some part of it, just ask and I can give you the source.)

So, here we go.  From watching the news, talk shows, reading the paper, you kind of get the feeling that the Catholic Church is really behind the times when it comes to women’s issues.  Somehow, because women cannot be priests, and because the Church does not condone hormonal contraceptives nor abortion, that somehow it views women as less than men.  This creates a vision that the Church wants to keep women in the kitchen, hold them back, and thinks they are not good enough to hold the clerical position.

I can hear you, “and you’ll say that’s wrong, and the Church does all these things because she loves women.  We get it; you’ve drunk the koolaid.”  Yes!  Exactly!  But no, no mindless koolaid drinking here.  Every argument against the Catholic Church when it comes to women can be summed up in one word: Mary.

“Oh,” you say, “you mean the humble, oh-so-pious young girl, who looks annoyingly meek and never raises her eyes, who is always submissive?”  Haha, no.  I mean the young girl who had the guts to say yes to a heavenly being and accept the gift of the Son of God in her womb, a young girl who knew what scorn and scandal she would bring on herself by being pregnant outside of marriage, but said yes anyway, a young girl who rebelled against the norm in her complete surrender to God, a young girl who held within her womb the very being of God. 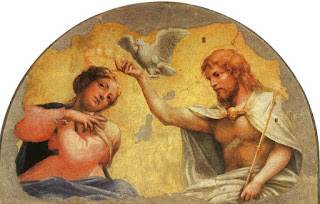 God could’ve chosen any avenue to save His people.  He could have merely become an adult man, it was not outside His power.  Yet, He chose to come to earth through a woman.  God chose to become a fetus, to let the very first home of His incarnate Self be a woman’s uterus.  Every child has genes from his mother and father.  The only human genes Christ received where that of a woman.

God elevated all of womanhood in choosing Mary to be the mother of God.  Yet, He took it a step further in honoring her Queenship in heaven.  There is no other human being who reigns in heaven.  No other Saint nor pope nor prophet is held in as high esteem as Mary.  Christ is the King, but He is also God.  The only fully human person who rules in heaven is a woman.

And every pope, every Saint, every Catholic begs for her prayers and guidance.  It is a woman that is held in such admiration.  If it seems that the Church is saying “no” to certain things, it is only because she knows that women deserve better.  Women are so respected that the Church does not want to be a part of breaking down her fertility, dismantling her feminine parts.  The world needs to change to see her femininity not as a setback but as highly dignified; it is the world’s mindset that should be forced to change, not the woman. 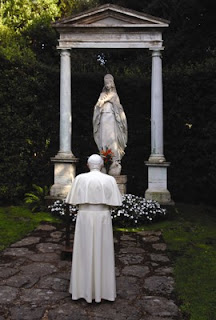 “But!  But!  The priesthood!”  Ah, yes, the all male priesthood.  Well, I have an answer for that, and it will probably surprise you.  But you’ll have to get my book to hear that one! ;-)

Let’s hear it for woman, who so totally rules!
Mary, our mother, happy birthday, dear Queen!