Breakdown of the Family–not when women left the home, but when MEN did…

Are you ready for a new adventurous topic?  Great!  Because this post will begin a new discussion concerning the male dynamic in a culture that supports new feminism.  Our first contributing male author is Kevin Ford.  His bio states: "Kevin Ford is married to his wife Mary, and they have two young daughters. He and his family currently reside on their farm in southern Kansas. Kevin is a full-time organic farmer with a degree in Theology from Benedictine College, and he actively promotes the Catholic Land Movement and the benefits of rural life for Catholic family and culture."

I recently read an article by Kevin in the Distributist Review (distributistreview.com), that peaked my curiosity so much I had to inquire about it.  Though the whole ideology behind his article, I haven’t fully wrapped my mind around, three key elements drastically caught my attention. First, the breakdown of the family began not when women left the home, but when men did.  Secondly, the etymology of the word Hus-Bond literally means House-Bound.  And thirdly, he questioned our economic system of wages and offers a different idea.  When contacting the Distributist Review for permission to repost, Richard Aleman from the review offered this further explanation of that third point:

“The main thrust of Distributism is local production for local consumption, so while its agrarian aspect is central to restoring ownership, what we are mostly talk about is decentralizing the economy away from urban areas and restoring it by growing local economies. This is key in order to regain widespread ownership away from urban concentration (which enables the wage society) and back into small towns. The small town needs farmers, but it also needs "mom and pop" retail businesses, clothing manufacturers, graphic designers, and so on.   This is what we call "the parallel economy". If we want to regain a toehold on our economy we will have to create the new Main streets that will rival Big Business and reduce the size of government.” (emphasis added) 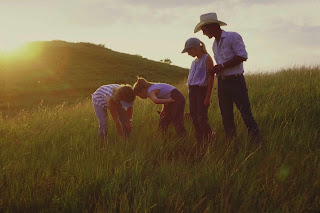 What could be more “New Feminist” than speaking about the necessity of the MAN being at home!   I’m curious to see what you all think about this… I’m not quite sure what to make of it yet, but it was so very intriguing to me!  Here's Kevin's article:

"A little more than a year ago, I quit my job as a theology teacher at a Catholic high school to become a full-time organic farmer. I like to call myself a “Catholic farmer”, because I am striving to live out the Church’s teachings on marriage and the family, as well as Catholic social teaching, in my work and in the daily life of my family. I had been contemplating a return to the land for several years, and I finally opened myself to the grace needed to take such a leap of faith. I feel as though my story is a microcosm of the Catholic Land Movement as a whole. I doubt if any will follow exactly the same path, but hopefully some will end up on the land, working to restore Catholic culture, just as I did. After much prayer and discernment, I have narrowed my reasons for returning to the land to the following: restoring Catholic family life, bringing wholeness to our lives, regaining simplicity, and building Catholic community.

In our world today, nothing comes under attack more often than marriage and the family. In this modern assault, I felt it necessary to flee to the fields in order to provide an environment that is natural for family life, one where my children could flourish. City life with its “damnable conveniences” as Fr. McNabb, O.P., called them, is often a source of great temptation. The pagan temples and idols of today are not so clearly perceived, because they are often disguised in masks of pleasure, convenience, and materialism. To me, a return to the land marks a radical departure from the frivolity of modern city life as I seek to live a life that is meaningfully fruitful. Pope Benedict XVI has stated: “The rural family must regain its place at the heart of the social order.”1 The rural family has traditionally been the backbone of healthy cultures. Never in history has the mass of humanity been concentrated in the cities as they are today. Pope Pius XII speaks very wisely of the benefits of rural life for families in his address to Italian farm laborers:

Your lives are rooted in the family—universally, deeply, and completely; consequently, they conform very closely to nature. In this fact lies your economic strength and your ability to withstand adversity in critical times. Your being so strongly rooted in the family constitutes the importance of your contribution to the correct development of the private and public order of society. You are called upon for this reason to perform an indispensable function as source and defense of a stainless moral and religious life. For the land is a kind of nursery which supplies men, sound in soul and body, for all occupations, for the Church, and for the State.2

I can add very little to what the good Pope of happy memory already stated. I sought a place for my family to live out its life in totality without the distractions that city life often brings. I found that place far from the glitter of city street lights, way out in the country whose nights are lit by heavenly lights alone.

As I labored away from my family during my first three years of marriage, I became acutely aware of a great lack in the way our economic system is set up. As I taught theology to high school students, I would often find myself thinking about my own children and the difficulty I would have passing on the faith to them, simply because of how much time I must spend at school. I did not doubt the dignity of the teaching profession. However, I doubted the wisdom of our modern age that insists on men working separate from their families, and always seeking after a wage. As I began to study the breakdown of the family so characteristic of our times, I began to realize that the breakdown of the family could be traced to the implementation of the wage system.
What I realized is that the family didn’t start to fall apart when mothers left the home for the work place. Rather, the family’s disintegration began when fathers left the home and the land for the convenience of a city wage. Further studies brought further revelations. The etymology of the word husband was absolutely fascinating. Hus-Band literally means house-bound. When a man was married he became house bound. There in the home with his wife he would bring forth a family. There in the home he would work and provide for the family; everything was centered around the home. The home was not a place to return to after work, but rather it was the place of work, it was the center of life, and it was the stability that fostered healthy families. I realized that what I wanted was a life that was whole, one that had integrity. I wanted to live, work, and pray with my family all the time, not just in the evenings or when I was off work. I wanted to be a husband in the true sense of the word, and I wanted to be a father who was always there. Working towards a self-sufficient life on the land offers me the opportunity to truly be a father to my children. I can’t express in words how beautiful this has been.
The third reason I returned to the land was to regain simplicity. Reading Eric Brende’s book, Better Off: Flipping the Switch on Technology, profoundly impacted my views on modern technologically-saturated life. I began to increasingly question the necessity of so many of man’s modern inventions. ... This was especially evident in farming where machinery had nearly destroyed the small farmer and created many demands for time and capital that could not be obtained on the farm. The byproduct of animal power was increased soil fertility through manure. The byproducts of machinery were used oil, broken parts, old, rusting machines on the back forty, and pollution of all sorts. I also noticed that a horse’s food could be provided on the land, but very few farmers had ways to provide fuel for their machines. It is not that all machines are bad, but the scale to which technology has infiltrated our lives led me to take my family down a different path. Now we analyze our technology piece by piece and look carefully at its effects on family life. If it is truly more harmful to family life than helpful, then we simply don’t need it. ... We find that with less technology, we suddenly have time for activities we previously couldn’t squeeze in. Without the time in front of the television, we find time to read together, sing and dance with the piano, or simply sit out back in the evenings and watch the chickens scratch about (chickens can be a source of great hilarity, believe it or not). This simplicity gets rid of excess distractions and leaves us with more time for one another.
The final reason I returned to the land was in hope of rebuilding Catholic rural community...
Our faith is sacramental, and therefore it is not meant to be only a spiritual reality. Catholicism with its sacraments corresponds to man in his entirety. We who are embodied souls need a faith that is both physical and spiritual. Thus we seek in some way to incarnate our Catholic life on the land and to share that life with others. I went back to the land because I believed there I would find the ideal environment in which to raise my family. There I could be a father who was present for my family. It has been a beautiful journey, and it is really just beginning. It is my hope that one day I will be surrounded by like-minded Catholic neighbors, all striving together to build a new Catholic culture. Going back to the land has radically changed my life and my goals. It has transformed my way of thinking, and it daily encourages me to be a better man. By throwing myself into the hands of providence, I am forced to give my fiat or give up. Those are my only real choices. Yet, I have never done anything so rewarding and at the same time so difficult. I hope many others will follow in my footsteps, and that one day we may have a countryside filled with Catholic smallholdings once again. Vivat Christus Rex!" - Kevin Ford.

Interesting, right?  No, I'm not ready to go buy a farm!  ;-)  But some of the ideas are very intruiging and definitely worth pondering.  So, what do YOU think?


Notes
1. Message of his Holiness BENEDICT XVI to the Director General of the Food and Agriculture Organization (FAO) for the Celebration of World Food Day, from the Vatican, 16 October, 2006

2. Speech delivered by His Holiness to the delegates at the Convention of the National Confederation of Farm Owner-Operators in Rome on November 15, 1946, #4.
Posted by Theresa Martin at 4:29 PM